Those are the three things Gary Howard, who has nearly two decades of experience in the cannabis industry, will never cheap out on. But it’s the last one—humidity control—where he sees too many growers taking too many risks and making mistakes.

As owner of Urban Garden Center and managing director of Safe Alternatives Dispensary in Maine, Howard has witnessed the errors of other growers—and yeah, made a few of his own along the way. Those mishaps include everything from employing undersized dehumidifiers to operating with poor air circulation, resulting in stagnant growing environments.

“The biggest mistake we see growers make is that they don’t want to put money or resources toward humidity control when they start growing,” says Howard. “It’s not until after they develop a problem, like powdery mildew or bud rot, that they take it seriously.”

Howard and Clif Tomasini, another industry veteran and business director at Quest Dehumidifiers, have several tried-and-true tips that any indoor cannabis grower, from home hobbyist to commercial cultivator, can implement to perfect humidity levels for their operation.

Seal and Insulate Your Room

Building techniques have come a long way, and one of the best ways to create a stable environment that allows for humidity management is to make sure your room is properly sealed and insulated, says Tomasini.

Commercial builders know this and use things like foam insulation to create a thick barrier between the grow room and the outside environment. This is critical not just in regions where outdoor humidity is high, but nearly everywhere, including Colorado and New Mexico.

“It prevents outside factors like wind, humidity, and direct sunlight from impacting the grow,” Tomasini says. “Some of those factors affect temperature and, in turn, affect humidity, so it’s all connected. Luckily, a well-insulated room can help keep those variables at bay.”

Temperature is a concern for every grower, given the immense amount of heat that lights can produce. But, when controlling temperature, consistency is key.

“Too often, growers oversize their air conditioning to an extreme degree,” says Tomasini. “Our guts may tell us that a giant AC system is the answer, but in reality, if it’s too big—or too small—a system will cause temperature fluctuations that adversely impact plants and humidity levels.”

Two factors contribute to the temperature fluctuation in air conditioning systems: the deadband and short cycling. The deadband is a three to five-degree Fahrenheit range around the temperature a thermostat is set to. At the upper edge of the deadband, an AC unit will cycle on to keep things cool; at the lower end, the AC shuts off to prevent things getting too cold.

Given the nature of this band, oversized AC systems tend to run in brief periods or short cycles, which not only gobble up excessive amounts of energy, but also create an unstable growing environment in which temperatures and humidity spike and dip rapidly over a brief span of time.

Oversized air conditioners aren’t the only problem growers face, though. When an AC unit is too small, the temperature gradually rises over time. As temperatures rise, withering becomes a major problem for cannabis plants, which thrive in a predictable, consistent climate.

According to Tomasini, the key to effective temperature and humidity control is to size your AC so it runs consistent cycles for longer durations to minimize changes within the deadband.

Pictured on a graph, a proper temperature and humidity cycle would look like a long, shallow wave rather than a jagged reading with lots of spikes and valleys. Sizing your AC also requires understanding of the region where you grow, number of lights in your grow, and how your room is insulated.

“Short cycles create spikes in temperature. Humidity is relative to temperature, so when temperature goes down, humidity goes up, and vice versa,” Tomasini says. “Those fluctuations impact plant growth and create unstable environments where mold and mildew can take hold.”

When an AC unit is sized properly, it also helps pull more water from the air, which puts less strain on your dehumidifiers and helps them work in a more predictable fashion.

Air Movement Is a Must

Despite the fact that it holds water, humid air is lighter than the rest of the air surrounding it, so it rises to the top of a grow room. CO2, critical for plant growth, settles near the bottom of the room.

For those reasons, Howard and Tomasini agreed that circulating air is a vital component in a healthy grow.

“Air movement is critical, but oscillating wall fans aren’t enough,” says Howard. “Those cool the temperature on your canopy but they don’t circulate air. We need air in a room coming from the top, the bottom, and the walls.”

Floor fans are the easy answer, Howard says. These fans can pull air through the plant canopy, helping to create a more consistent environment with balanced humidity levels and a more equal distribution of CO2.

One of the simplest and cheapest things growers can do to manage humidity, Tomasini says, is managing standing water effectively.

This simple solution is one of the most commonly overlooked. Growers should ensure the grow room has proper drainage, so that if overwatering occurs, stagnant water doesn’t pool on the ground adding unnecessary humidity to the space. In addition, any water reservoirs in a growing space need to be covered to keep that water where it belongs.

“I’ve seen grows where the humidity control system is dialed in but they’re still seeing fluctuations in humidity levels,” says Tomasini. “On occasion, it’s been because a large water reservoir is exposed, releasing moisture into the air.” 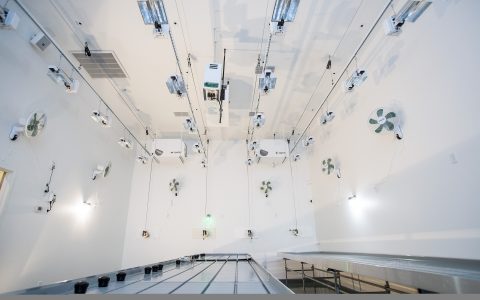 Use a Dehumidifier (and Size It Properly)

It may sound obvious to use a dedicated dehumidifier when trying to control humidity, but in all his years of experience, Howard says it’s an area where he has seen many growers—particularly new ones—try to cut corners.

“They’ll go to one of the big retailers and pick up a cheap, 65-pint unit, meant to pull a little bit of water out of a home,” Howard says. “That’s not going to cut it.”

Residential dehumidifiers are a poor choice for a grow room for a couple of reasons. First, they are inefficient, using a lot of electricity to do fairly little work and resulting in outsized electrical bills. Secondly, and more importantly, they simply aren’t built to hold up under the workload of a grow room, which needs the capacity of a commercial dehumidifier.

“The initial investment for a commercial unit can seem high, but once growers have a problem, whether it’s mold or high utility bills, they get on board quickly,” Howard says. “The money saved on electricity and replacements over a residential unit will ultimately pay off.”

As with air-conditioning, knowing how to size a dehumidifier for your room is also critical. Plants transpire about 97 percent of the water they absorb, so you want a large enough dehumidifier, or multiple units, to pull that amount from the air, while also having redundancy built into the system so that if one piece needs maintenance, the rest of the setup hums along efficiently.

“You never know when something is going to stop working, and growers have a lot on the line in terms of product and revenue,” Tomasini says. “Having redundancy built in prevents those worst-case scenarios where humidity spikes and mold takes hold.”

How to Clone Your Marijuana Plants
If you have your own marijuana garden, especially if you are growing marijuana indoors, taking clones may be a great option to make your garden more efficient. More than that, clones allow you to shorten the time of growing significantly.

How to Grow Cannabis Plants Indoors: Tutorial for Beginners
So, you want to grow your first cannabis plant indoors but do not know how to begin. Do not worry! We will tell you how, and you will see that everything is easier than it may seem.

Greetings, Growers!
Today we start our new project aimed at comprehensively covering every bit of news on growing marijuana. WeedGrowHub offers you to join us on an incredible journey and unveil the most important and fascinating secrets about growing weed.