Health Canada has granted a cultivation licence to Aqualitas Inc., the 3rd N.S. company to receive one

A Nova Scotia company will soon begin growing cannabis in a former pulp and paper mill in Queens County, and hopes the buy-local ethos extends to marijuana.

Health Canada granted Aqualitas Inc.'s cultivation licence Jan. 19, making it the third Nova Scotia company to get the approval — joining Breathing Green Solutions Inc., which has a production facility in the Wentworth Valley, and THC Dispensaries Inc. of Antigonish.

Myrna Gillis, co-founder and CEO, said Aqualitas plans to start growing its first crop in February and then it will test it and apply for a sales licence, with the hope of selling cannabis this summer. So far, none of the three Nova Scotia companies are licensed to sell.

Aqualitas's licence will only apply to medical marijuana, but that will change once cannabis is legalized, Gillis said.

"The biggest challenge is you can't do anything fast enough. Everything is moving so quickly in the industry. And so it's really just having the ability to have that unrelenting momentum to go forward but also being mindful that the people on their team take care of themselves, take care of their families, and that we don't lose focus of the most important thing, that we are a wellness company."

In preparation, the company has expanded the former Bowater's 40,000-square-foot warehouse to 70,000 square feet and installed the necessary security features. 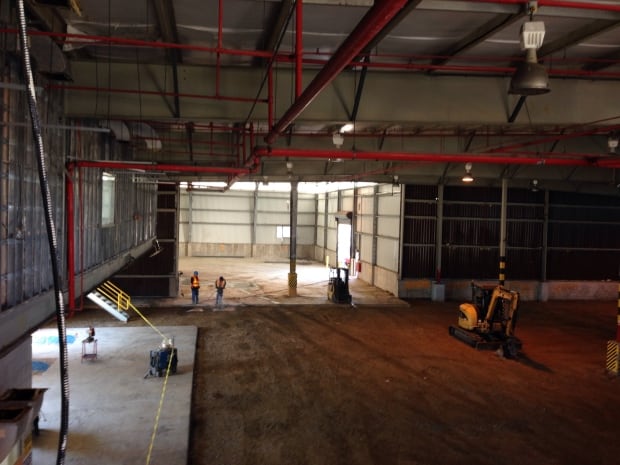 Aqualitas has renovated a former Bowater warehouse in Liverpool, N.S., and has turned it into a 70,000-square-foot production facility. (Emma Smith/CBC)

Aqualitas signed a 10-year lease with Nova Scotia Lands, the Crown corporation that manages the property. Gillis said they've raised $15 million and put much of that into the infrastructure and equipment.

There are currently 15 employees and Gillis hopes to have about 60 full-time positions later this year.

She said the July 1 legalization deadline has created added pressure to produce, but cannabis startups are in the unique position of having a waiting market.

"It's just a matter of making sure you have a product that is going to resonate with consumers that's high quality," she said. 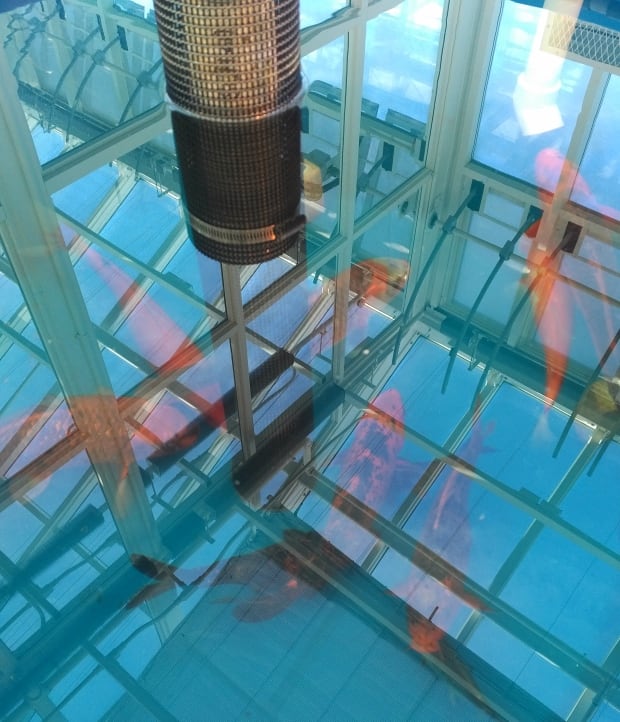 Aqualitas developed its growing method with the help of work done with koi fish at Acadia University. (Submitted by Aqualitas)

Gillis hopes the company's growing process sets it apart from competitors, as it is the only local company using aquaponics. Its plants will grow without soil, suspended in water, using the liquid waste of koi fish imported from Japan as fertilizer.

The company developed its technology in labs at Acadia and Dalhousie universities. An assistant biology professor at Acadia works as the company's aquaponics and research adviser.

Gillis said the fish ensure the water is nutrient-rich and that allows for larger yields. They are also cheaper to maintain than it would be to buy fertilizer, and Gillis said the process uses 90 per cent less water than other growing methods.

"You have the certainty of nutrient delivery that has come with hydroponic technology, with the benefit of it being an environmentally sustainable, all-natural process," she said.

"We like to also say that we've gone back to our Nova Scotia roots of fishing and land-based agriculture, but we've modernized it. And we think this technology will not only have tremendous opportunities for quality product in the cannabis market, but also long-term for food security."

Growing Marijuana Indoors or Outdoors: Choose As if You Were Making Wine
When it comes to treating marijuana as if it was wine, most people think about the legal background. In California, there was even an initiative called the Regulate Marijuana Like Wine Act of 2012, which offered to regulate all marijuana-related activities similarly to those of wine industry.